GESSEL advises a fund managed by Enterprise Investors in the process of its exit from X-Trade Brokers DM S.A.

GESSEL assisted a fund managed by Enterprise Investors in the process of exit by Systexan SARL from its investment in X-Trade Brokers Dom Maklerski S.A., which included a PLN 111.2 mln public share offering in an accelerated book building formula. The selling entity divested all the shares it held in XTB (numbering in excess of 22 mln).

On GESSEL’s part, the project was led by Krzysztof Marczuk, partner and Magdalena Szeplik, managing associate.

Enterprise Investors, in existence since 1990, is one of the largest private equity outfits in Central and Eastern Europe. To date, it has established nine funds with aggregate capital of over EUR 2.5 bln. Between them, these funds have invested almost EUR 2 bln in 143 enterprises in various sectors and exited 128 companies, realizing gross revenues of EUR 3.9 billion.

Warsaw-based X-Trade Brokers Dom Maklerski S.A. is Poland’s oldest forex broker. It was first established in 2002 as X-Trade Brokers and rechristened to XTB in 2004. It has a presence in 17 countries (including Italy, Cyprus, Belize, the UK, Slovakia, and China), and floated its shares on the Warsaw Stock Exchange in 2016. XTB is regulated by the Polish Financial Supervision Authority, the FCA, BaFin, and by CMB. 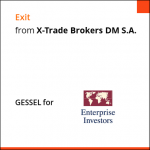