GESSEL provided comprehensive legal advice on preparation and effectuation of a PLN 20 mln public issue of new POLWAX S.A. shares on the Warsaw Stock Exchange with acquisition rights for current shareholders. We performed the due diligence study for purposes of the issue prospectus, advised on the attendant corporate issues, and represented the issuer in proceedings for approval of the issue prospectus by the Polish Financial Supervision Authority.

POLWAX S.A. plans to apply proceeds from the issue towards partly paying down its debt and financing a number of projects, such as overhaul of its production facility in Jasło, which will become the focal point of paraffin production and, towards this end, will take over production lines hereuntil housed in Czechowice-Dziedzice as well as being fitted with entirely new equipment.

The transaction was overseen on GESSEL’s side by Krzysztof Marczuk, partner, with Magdalena Szeplik, managing associate, Urszula Śleszycka, associate, and Leszek Koziorowski, partner contributing their expertise.

Polwax S.A. is a leading (European scale) producer and distributor of refined, deodorised paraffin, waxes, and paraffin-based industrial chemicals for a broad range of production applications. It was established in 1999 and is listed on the Warsaw Stock Exchange since 2014. 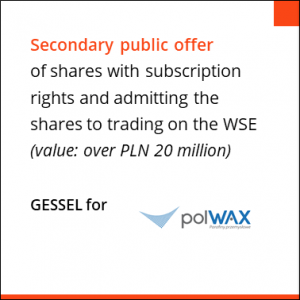