GESSEL as advisor to minority shareholders in Profim

GESSEL provided legal support to minority shareholders in Profim in a transaction for sale of their shares to the Flokk Group by way of a share exchange.

Consequent to this transaction, the Profim shareholders – among them a fund managed by Innova Capital – became minority shareholders in the Flokk Group, with funds managed by Triton Partners retaining a majority stake.

Profim is a leading producer of desk chairs and office seating; most of its output is exported to markets around Europe and the world. Its products are sold under the company’s own name within an extensive distribution network; the company also cooperates with renowned designers.

The Flokk Group is a European leader in design, development and production of office furniture. In 2017, Flokk took over two Swedish companies, Malmstolen and Offecct, as well as the Swiss market leader, Giroflex. Thanks to these acquisitions, the Group posted a 50% increase in revenue and achieved improved operating results.

GESSEL had previously provided comprehensive legal support in an earlier sale of shares in Profim and in finalisation of the investment by the private equity fund represented by Innova Capital.

On GESSEL’s part, the project was coordinated by Karol Sokół, Managing Associate. 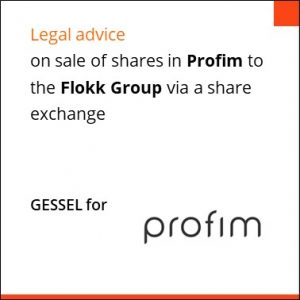