Beata is an expert practitioner in arbitration, M&A, private equity and commercial law. Former member of the ICC International Arbitration Court (2015-2021). Honorary President of the Lewiatan Arbitration Court (2017). She chairs the Audit Committee of the Polish Private Equity Association. To this date, Beata Gessel has participated, as an arbitrator, counsel and expert, in approx. 150 both domestic and international, arbitration cases (conducted according to rules including those of the ICC, UNCITRAL, SCC, VIAC, SAC, FCC, IAA, SCAI, SIDiR, Lewiatan, Polish National Chamber of Commerce and the National Depository for Securities). Member of the ICDR/AAA Rules Revision Task Force.

Widely recognised as an expert in arbitration as well as M&A transactions, in legal aspects of private equity / venture capital, and in business law. For many years Beata Gessel has been recommended by Chambers Europe and Chambers Global in “Most In-Demand Arbitrators” category. In 2021 she made a list of the “Most in Demand Arbitrators Europe”, as the only arbitrator representing CEE region. She is praised for her “inquisitorial style” and is described as “efficient with a strong commercial sense” as well as “heavily involved with various arbitration bodies”. Beata Gessel has been also recognised in Legal500 ranking as a Leading Individual in the Dispute Resolution Category, where she was named a “strong leader” and praised for “exceptional business acumen and second-to-none legal knowledge”. Featured as Thought Leader Arbitration by Who is Who Legal since 2019.

Beata Gessel is an adjunct professor in commercial arbitration as well as M&A transactions at the Cardinal Stefan Wyszynski University in Warsaw. Having received her PhD from Cardinal Stefan Wyszyński University in Warsaw in 2009; her monograph titled ‘Legal Character of Representations and Warranties in a Limited Liability Company Share Purchase Agreement (in Light of the Freedom of Contract Principle)’, published by Wolters Kluwer, became an essential source of legal doctrine in this respect in Poland. In 2019 Kluwer Law International published her habilitation thesis titled ‘The Legal, Real and Converged Interest in Declaratory Relief’. The book focuses on declaratory relief in litigation and arbitration. In 2021, she was awarded the title of habilitated doctor.

Please see the full list of publications and speaking engagements. 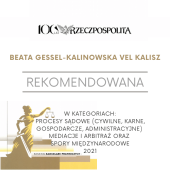 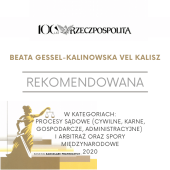 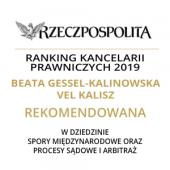