GESSEL provided comprehensive legal support at all stages of the transaction, among other aspects in drafting the documentation for sale of Velvet Care and representation of the seller in negotiations.

The involvement of our firm in AVALLON’s investment in Velvet began at the very inception of the project in 2013, when we provided legal support in the management buy-out of the company from Kimberly-Clark. We then went on to advise Velvet on various strategic aspects of its operations and, now, to servicing the fund’s exit from the transaction.

Velvet Care is a Polish company which ranks among the largest producers of cellulose-based personal hygiene products in Central and Eastern Europe. Velvet Care as such was incorporated in 2013, but the operation’s roots go back all the way to 1897, when the paper mill in Klucze by Olkusz (still the company’s main production facility) was first opened. In 2013, AVALLON, working with the support of a group of managers at the company, purchased Velvet Care from the Kimberly-Clark group. Over the intervening years, the company doubled its sales and significantly increased its profits.

AVALLON (www.avallon.pl) is an independent Polish private equity manager with a recognised track record in management buy-outs, having participated in approximately 100 MBOs since 2001. AVALLON’s partners have been active in the private equity markets since 1993. AVALLON MBO FUND II is AVALLON’s second fund, with a value of EUR 109 million; it pursues investment projects in a variety of sectors, always with the participation of management or founders of the company in question. AVALLON is one of the more active funds operating in the Polish market.

“We welcomed the opportunity to support AVALLON in its exit from Velvet Care with especial pleasure in that we have been involved in this project from its very beginning. We have advised on the management buy-out of the company from Kimberly-Clark, and then on its key strategic decisions. It is only natural, therefore, that we rejoice at the company’s indubitable success – from the moment of its acquisition by AVALLON, the company – among other achievements – doubled its sales and significantly increased its profits. The experience gleaned over the years of working with our Client has enabled us to efficaciously augment the entire process with out legal expertise. We take this as testimony to how a Client and professional transactional counsel can forge a strong relationship and parlay it into shared successes in the longer term” - Maciej Kożuchowski, partner heading the GESSEL team working on this project. 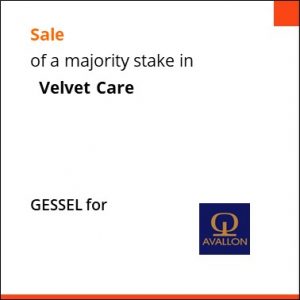