Between 1990 and 2000, worked at the Office of Competition and Consumer Protection, including three years as director of the Infrastructure Department and the authority’s main office in Warsaw; in this capacity, she oversaw all cases with antitrust aspects as well as contributing to harmonisation of Polish competition law with European Union law (joining Polish government delegations to Brussels and liaising with the competition authorities in Holland and Greece).

Upon leaving the authority, spent one year as head of the legal department of UPC Telewizja Kablowa Sp. z o.o. and then moved to GESSEL in 2001, assuming leadership of our firm’s competition law practice.

In 2014, she returned to the Office of Competition and Consumer Protection, where she spent the next three years as Vice President, managing the operations of three departments – Concentration Control, Competition Protection, and Legal. Her responsibilities included enforcement of Polish and European competition law and representing the Office vis a vis other governmental and public institutions (e.g. Polish parliament) and at the European Union level (e.g. within the European Competition Network). She initiated and oversaw the preparation of two publications recognised by the World Bank and by the International Competition Network in contests for the best educational/information project in the field of competition law: guidelines concerning the funerary services market (honourable mention in 2016) and guidelines concerning municipal water and sewage infrastructure (first prize, 2017). Over the period of 2015 through 2017, she also oversaw the updating of a series of guideline and clarificatory documents outlining Office of Competition and Consumer Protection policy and the formulation of instructions for business enterprises concerning protection of sensitive data in the course of administrative proceedings.

As an expert in competition law, published articles in the press and addressed various conferences, workshops, and training events.

During her first stint at GESSEL, repeatedly named as highly recommended in the field of competition law by the Practical Law Company in Global Counsel 3000 and by Chambers Europe in Europe’s Leading Lawyers for Business. In 2009, named in the ranking of law firms compiled by the Rzeczpospolita daily.

Graduate of the Faculty of Law and Administration at Adam Mickiewicz University in Poznan; completed training articles as a judge, whereupon she successfully sat for examinations for admission to the bar and to practice as an attorney.

Completed competition law internships at the Bundeskartellamt in Berlin (1993), the Office of Fair Trading, Monopolies and Mergers Commission in London (1995), and at the Federal Trade Commission, Antitrust Division of the American Department of Justice (1997). 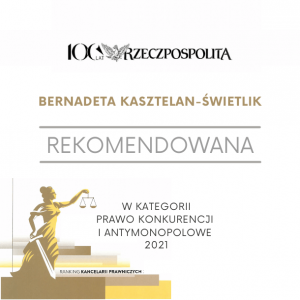 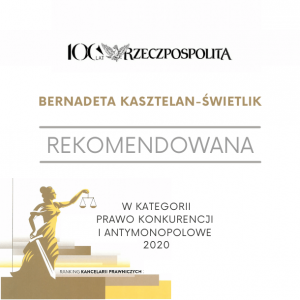