Dr. Janusz Fiszer is a legal advisor and a certified tax advisor, graduate (with honors) of the Warsaw University Law School (1980), holding a doctoral degree in law (Warsaw University – 1986), an expert in tax law, Partner in the GESSEL Attorneys at law.

Since 1980, Dr. Fiszer has been a researcher/lecturer at the Warsaw University School of Management (1980-1982 as a Junior Assistant, 1982-1987 as a Senior Assistant, 1987-2007 as an Assistant Professor and since October 2007 as an Associate Professor). In 1990-1991, Dr. Fiszer acted as an independent expert for the Polish Parliamentary Commission for Economic Policy, Budget, and Finance, advising on the first draft Law on Personal Income Tax and the first draft VAT Law. In 1991-1993, Dr. Fiszer was an advisor to the Polish Minister of Finance (as a co-negotiator of numerous international double taxation treaties [Cyprus, Singapore, Zimbabwe, Republic of South Africa, former Czechoslovakia, Romania, additional protocols to the tax treaties with Finland and Denmark], and as a delegate of the Polish Ministry of Finance to the OECD Committee on Fiscal Affairs and to a number of Working Groups of this Committee, etc.).

While working for White & Case, and at the request of the then Ministry of Privatization (later the Ministry of the State Treasury), Dr. Fiszer was a co-author of the draft Law on National Investment Funds and their Privatization, for the first time introducing the closed-end tax-exempt investment funds to the Polish legal system (including drafting of the entire secondary legislation), a consultant on the new draft Law on Investment Funds, and the Law on Industrial Funds. In 1996-2000, at the request of the then Ministry of Industry and Trade (now the Ministry of Development), Dr. Fiszer co-authored the governmental draft Law on Commodity Exchanges and draft Law on Bonded Warehouses.

Dr. Fiszer is also a co-author of the Commentary on the Law on National Investment Funds and their Privatization (1993). Dr. Fiszer has been or still is a long-time correspondent for professional tax magazines such as “Tax Notes International” (US),“Tax News Service” (The Netherlands) and “East European Business Law” (UK).

From 1993, Dr. Janusz Fiszer has been a member of the editorial board of the monthly professional tax journal Monitor Podatkowy and from 2004 the author of regular bi-weekly and monthly tax comments and interviews in the daily newspaper Dziennik Gazeta Prawna.

In 1982-1983, Dr. Janusz Fiszer received a research scholarship to the University of Kansas School of Business in Lawrence, Kansas, USA. In 1988-1989 Dr. Fiszer was awarded a research scholarship by the Deutscher Akademischer Austauschdienst-DAAD, and in 1990 by the Thyssen Foundation [Fritz Thyssen Stiftung], to the Center for International and Foreign Tax Law at the Ludwig-Maximilians University of Munich in Germany.

The 2013 edition of the prestigious Ranking of Law Firms by the leading Polish newspaper Rzeczpospolita, published in April 2013, lists Dr. Janusz Fiszer as an “recommended lawyer” in the Tax category for the 9th consecutive year. Also, the prestigious Rankings of Tax Advisory Firms by the newspaper Rzeczpospolita, published in June 2012 and June 2013, respectively, list Dr. Fiszer as “the best expert (leader) in international taxation”. 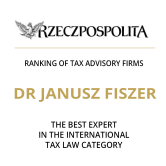